What You’ll Find on the Fabled Four-Hour Journey from L.A. to Death Valley

What You’ll Find on the Fabled Four-Hour Journey from L.A. to Death Valley

Despite its notorious reputation as both the hottest place on Earth and the driest location in North America, Death Valley is typically overshadowed by the desert areas closer to Los Angeles. Joshua Tree is hipper and Palm Springs is posher. So when you’re out at Death Valley National Park, you’re just as likely to run into someone from Stuttgart as Studio City.

But Los Angeles helped create Death Valley, both as myth and tourist attraction, turning it into a destination soon after this vast desert region emerged from its Old West ways. “Los Angeles, in effect, invented what we now know as the contemporary Death Valley,” says Char Miller, W.M. Keck professor of environmental analysis at Pomona College and co-author of Death Valley National Park: A History. “The accessibility was paved, quite literally, by Angelenos’ desire to actually see the wild desert. Those first hardened roads built in the teens and 1920s really were designed to serve the buses that were starting to drive out there from L.A.”

These days, under the best of conditions, the trip between downtown Los Angeles and Death Valley takes a little over four hours. You could drive part of the way along Interstate 15, but that route, with its frenzied Vegas-bound drivers and a comparatively anti-climactic arrival in Death Valley itself, is far less appealing than following State Highway 14.

Past Sylmar, where water from the Owens Valley first arrives in the city at the Los Angeles Aqueduct Cascades, Highway 14 begins at the Clarence Wayne Dean Memorial Interchange. It’s the tangle of freeways named for the heroic Los Angeles police officer killed when he rode his Kawasaki Police 1000 into the void off the end of a collapsed overpass as he responded in the immediate aftermath of the 1994 Northridge Earthquake.

Another 30 minutes or so north, the sandstone slabs at Vasquez Rocks, tilted halfway to vertical by seismic activity along an offshoot of the San Andreas Fault, rise on the left side of the freeway. But it isn’t until you’re past the generic sprawl of Palmdale and Lancaster that the road opens up and you truly arrive in the desert. A bit over an hour from DTLA, traffic gods be willing, you’re into the outback. 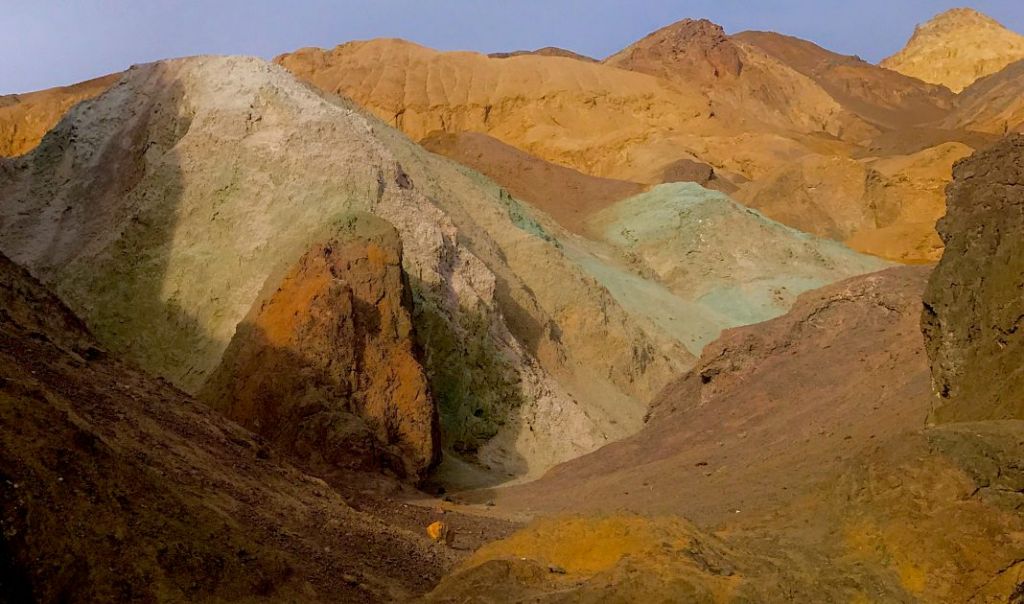 The Tehachapis rise on the west, then past the town of Mojave, the highway runs along the base of obscure subranges of the Southern Sierra—the Piute and Scodie Mountains. Seen in movies from The Mummy in 1932 to Jurassic Park, the badlands and orange-banded buttes at Red Rock Canyon State Park offer a bit of Bryce Canyon-style color before you leave Highway 14 behind and turn off for Ridgecrest with the big empty still to come. At least once you get through Trona.

Along Searles Lake, this mining town shares its name with the nearby Trona Pinnacles, the bizarre tufa towers to the south that originally formed underwater and now rise as high as 143 feet above the dry lake bed. If the pinnacles are a wonder of nature, gritty Trona itself (the high school football team plays on a sand and dirt field because grass won’t grow here) is a byproduct of its extraction economy. Giant processing plants convert brine solutions mined from the lake into such products as borax, soda ash, and sodium sulfate. It’s a jarring industrialscape of smokestacks, conveyors, and rail cars, all set against the bright white expanses of the dry lake that sustains the town.

Then, nothing. Or at least a fair approximation of nothingness. North of Trona, the Trona-Wildrose Road drops into the Panamint Valley, Death Valley’s neighbor to the west. For 30 miles you travel across the barren creosote flats with 11,049-foot Telescope Peak, Death Valley National Park’s highest point, looming above. A short detour leads to Ballarat, the battered remnants of a town that served miners working in the Panamint Range during the early 1900s. But except for a few other Death Valley-bound cars and the occasional fighter jets ripping low over the valley, California doesn’t get any lonelier than this.

By comparison, Death Valley itself is positively urban. But only by comparison. Other than the commercial hub at Stovepipe Wells, which you reach after the twisting, almost ceremonial descent from 4,963-foot Towne Pass, the only developed area is at Furnace Creek, home to The Oasis at Death Valley resort. And it’s at the resort’s historic Inn at Death Valley, the recently renovated luxury hotel originally known as the Furnace Creek Inn, where the area’s connection with Los Angeles is most tangible. The hotel was designed by Albert C. Martin, the architect who gave us Los Angeles City Hall. A classic national park lodge in the tradition of the Grand Canyon’s El Tovar Hotel, the inn is to L.A. as Yosemite’s Ahwahnee Hotel is to San Francisco.

With the decline in borax mining, the Pacific Coast Borax Co., owners of the Tonopah & Tidewater Railroad, wanted to find additional uses for their rail line. Tourism to Death Valley seemed like one option, and the opening of a hotel at Stovepipe Wells in 1926 spurred the development of a rival inn at Furnace Creek. Working through his business ties in Los Angeles, Death Valley railroad and borax executive Frank Jenifer hired Martin to create a Mission-style luxury hotel, a look that certainly would have felt both romantic, yet familiar to upscale Southern Californians of the time.

“Martin was a major player in the Los Angeles architecture world,” says Miller. “Someone of his stature would have been a logical choice. He had done Mission-style architecture before, which is what they wanted there instead of a rustic, ranch-like space. They knew exactly what audience they were appealing to.” 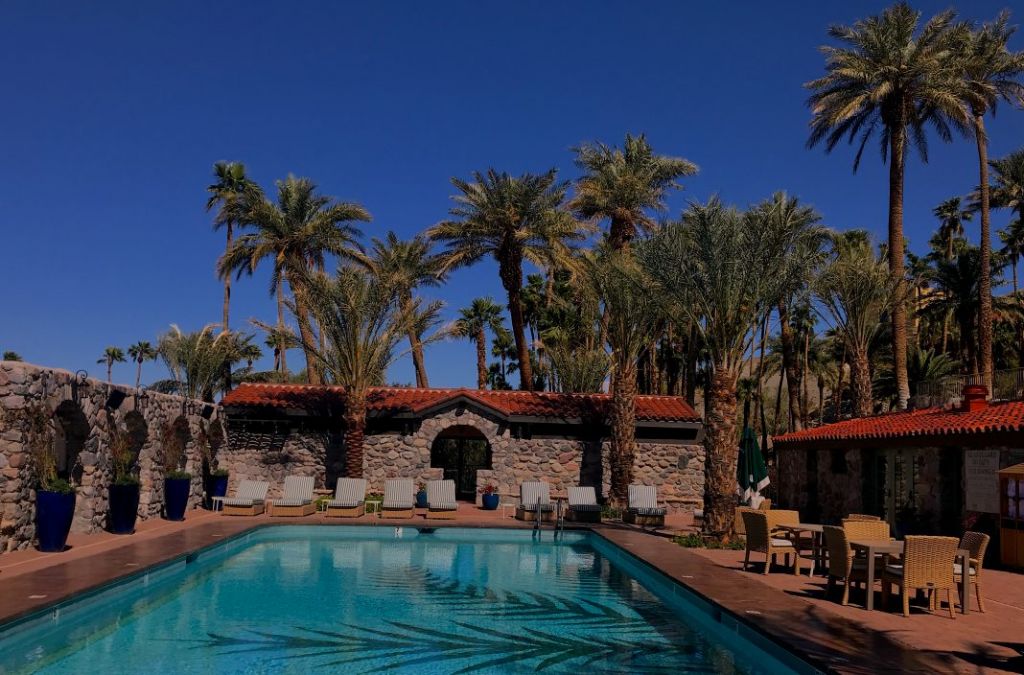 The pool at The Inn at Death Valley. Courtesy of Matt Jaffe

During the summer of 1926, Paiute and Shoshone laborers started to make the adobe bricks for the hotel, which would become one of the country’s biggest adobe buildings, but actual construction didn’t begin until November. Promoted as “possibly the most uniquely situated hotel in the world,” not much of an exaggeration considering Death Valley’s remoteness and the inn’s commanding views, the hotel opened in February 1927 after just two months of construction. Building costs came in at $86,000, although even that modest figure (about $1.2 million today) doubled the original budget projections. Martin earned precisely $2,616.98.

With its booming population and the country’s highest rate of automobile ownership, Los Angeles represented a ready-made market for the 12-room inn. Filmmakers had already discovered Death Valley (parts of Eric von Stroheim’s Greed were shot here in 1924) and the inn quickly expanded, adding a new wing and the now-famous spring-fed swimming pool, which remains perpetually in the mid-1980s.

“America’s Most Unusual Winter Resort,” touted one promotional publication from the 1930s showing an illustration of a golfer in plus fours breeches (at 214 feet below sea level, The Furnace Creek Golf Course at Death Valley is the lowest in the world) and a woman resembling the Jantzen swimwear logo diving into the crystalline pool. “From November to May mysterious Death Valley is one of the most perfect vacation spots in America.”

The Inn, along with its sister property The Ranch at Death Valley, recently underwent a $100 million renovation that reinvented the ranch’s previously moribund entrance area as a Mission-inspired zocalo and updated the inn’s rooms and lobby while preserving the historic character. Gone are the acoustic tiles from The Inn Dining Room and a garden has taken the place of a parking lot that obscured views out over the valley. 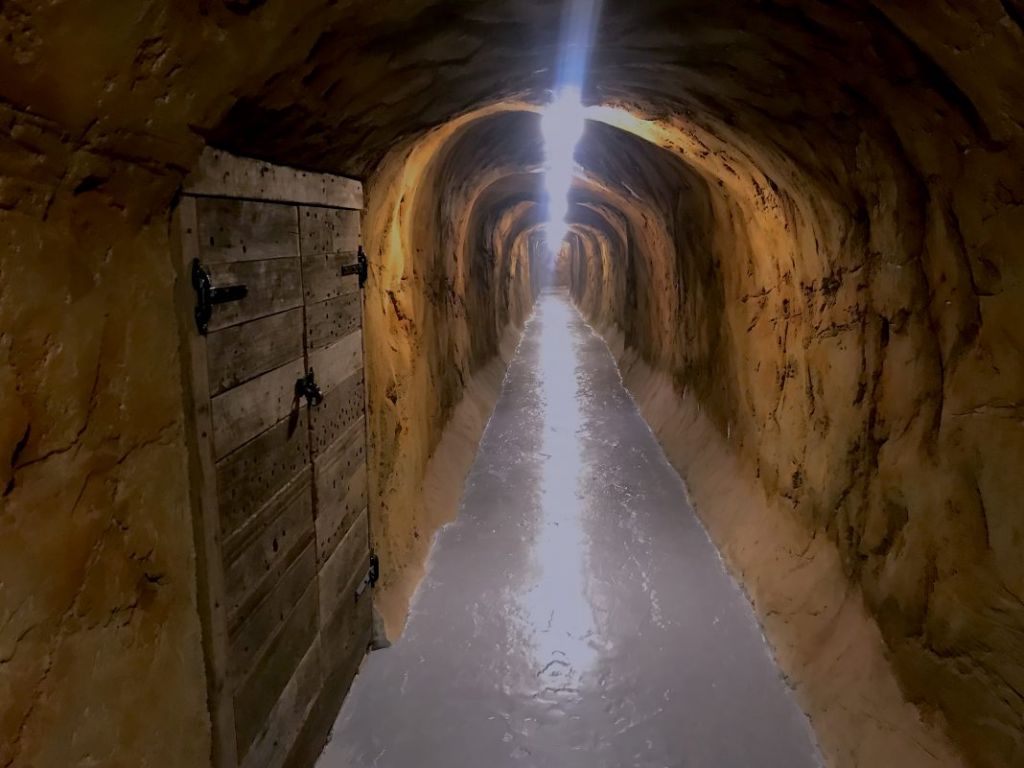 A tunnel at The Inn at Death Valley. Courtesy of Matt Jaffe

New casitas have opened below the main hotel, but you’ll still find many of the features that give the inn its sense of place: the long mine-like tunnel that runs through the rock from the lower parking lot to the elevator, old metal fire doors in the labyrinthine hallways, and beautiful exterior walls constructed from local stone.

A greatest hits of Death Valley attractions awaits within an easy drive: sunrise at Zabriskie Point, the lowest point in North America at Badwater Basin, and the remarkably colored badlands at Artists Palette. But at 5,262 square miles, Death Valley is the largest national park in the Lower 48, bigger even than several states. Within that vastness, the park encompasses some of the country’s most remote, untamed places where unwary visitors, especially as temperatures climb, can stumble their way into serious trouble. 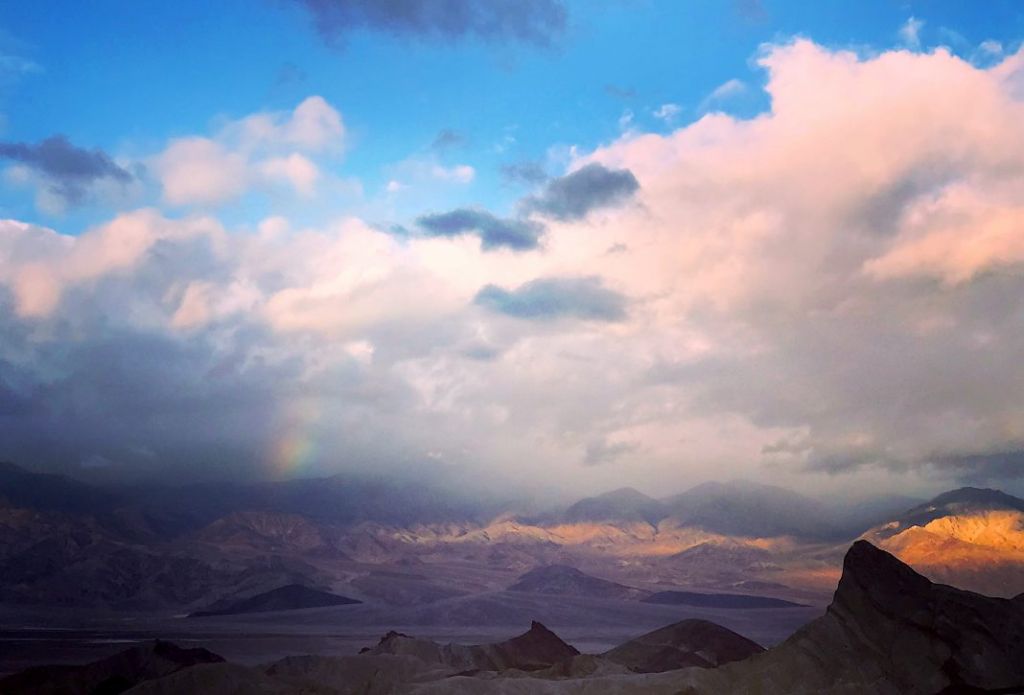 “’Death Valley’ is not a misnomer,” says Miller. “There’s a line in the book that I got from rangers: ‘Death by GPS.’ It’s so far off the map, literally and figuratively, that you can be misguided by GPS and that can end your life. That’s part of the whole mystique of being in such an unusual landscape.”

For more than 90 years, the inn has found a balance between Death Valley’s menace and the creature comforts upscale travelers from Los Angeles and around the world expect. “You can walk out into this landscape of death, then retreat by the fireside and drink a martini at night,” says Miller. “It strikes me as a pretty bougie environment. But how much fun is that?”

« Why Basketball Icon Bill Walton Loves The Oasis at Death Valley
Summer in Death Valley: How to Chill Out in the Hottest Place on Earth »
Our site uses cookies.