When you visit the ghost towns in and around Death Valley National Park, you’ll see little more than the foundations and crumbling walls of buildings constructed more than a century ago. So don’t expect the staged gunfights and cool sarsaparillas of more tourist-oriented ghost towns. Get ready to use your imagination to bring these communities to life.

Some of Death Valley’s ghost towns were once communities with hundreds — even thousands — of residents who were drawn to this foreboding region by the promise of work or quick riches. Think about the combination of blind optimism and maybe a hint of desperation that drove people into the heart of North America’s hottest, driest desert in search of their fortunes. Most never found it.

Many of Death Valley’s onetime settlements are in remote areas. Panamint City, where 2,000 people lived in the 1870s during its silver mining heyday, is accessible either via a 13-mile round-trip hike or on a jeep trek best done by experts with winches on their vehicles.

Before you head out, keep a few things in mind:Some destinations may require high-clearance, four-wheel-drive vehicles.

-Even dirt and gravel roads normally suitable for passenger vehicles may become impassable following storms.
-Check on road conditions at the park’s Furnace Creek Visitor Center before trying to drive to your destination.
-Do not enter any mines; the walls and ceilings may be unstable.
-If you’re worried about wear-and-tear on your car, consider taking a tour or renting a jeep through Farabee Jeep Rentals in Furnace Creek.

Here are some ghost towns of note: 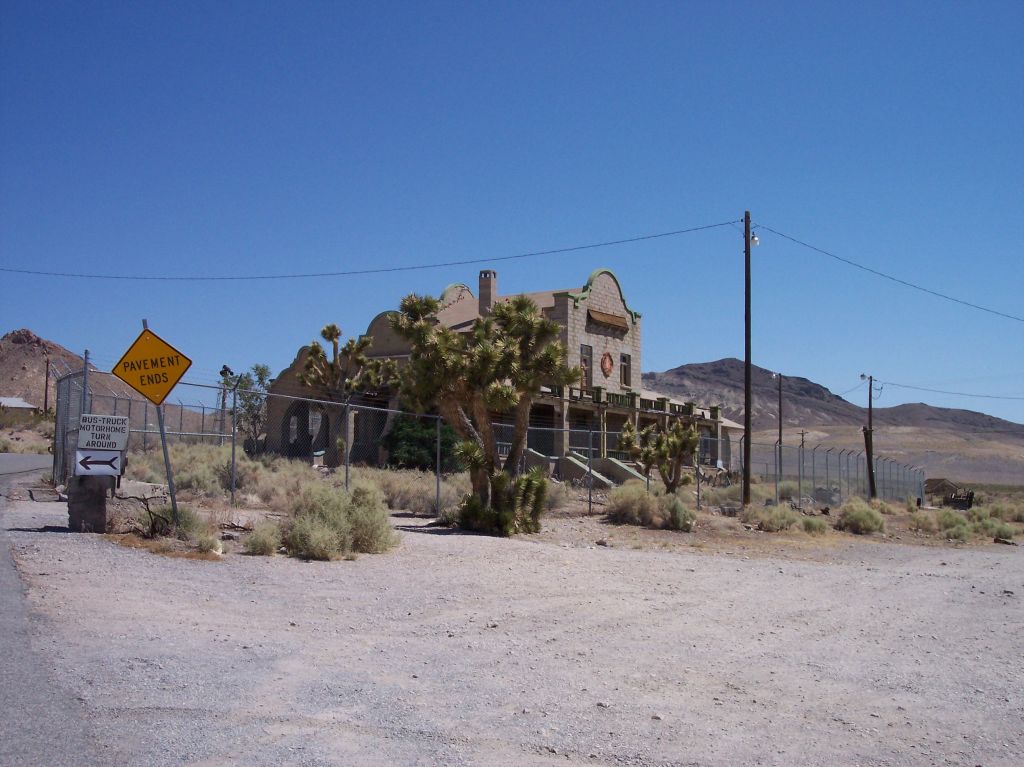 Compared to the more modest mining settlements in the Death Valley region, Rhyolite was a veritable metropolis. Across the border in Nevada, about 38 miles from The Oasis at Death Valley, Rhyolite boasted a stalwart, three-story bank building and a school for 250 children. There was an opera house and symphony. Rhyolite even had its own daily newspaper and some sources say the population reached 10,000 at its peak.

Like so many things, Rhyolite began with gold. In 1904, Death Valley legend Frank (Shorty) Harris and his friend Ed Cross were camped out. When Harris went to fetch their burros, he came upon a ledge that looked promising and used his pickaxe to chip off a piece. “The chunks of gold were so big that I could see them at arm’s length…Right then, it seemed to me that the whole mountain was gold.” The green rock, spotted with yellow, reminded Harris of a frog’s back. And so the two named their claim Bullfrog.

After the discovery, Rhyolite quickly grew. Electricity arrived in 1907, as did misfortune: A panic in U.S. financial markets decimated the banking and mining industries. Despite its early promise, the mine closed in 1911. By 1916, Rhyolite was well on its way to being the ghost town you can visit today.

You’ll see a number of original buildings, including the walls of the Cook Bank and an intact train station (on private land). Rhyolite’s many saloons provided a unique building material and the town is also home to a beautifully preserved house constructed from bottles.

Dubbed “the wraith of the desert,” Ballarat in the Panamint Valley west of Death Valley was named for a famous gold mining center near Melbourne, Australia.

Sitting along the base of the Panamint Mountains, Ballarat briefly boomed between 1897 and 1905 when it served as a hub for gold miners working in the range. Ballarat had a water source roughly half a mile away at Post Office Springs, and at one time the population reached about 400 — enough to merit a Wells Fargo stagecoach stop and to keep three hotels and seven saloons in business. There was also a jail, as well as a school with 31 students.

But as a new gold rush began at Tonopah in Nevada and the local stocks dwindled, so did Ballarat. By 1917 its post office finally closed. These days you’ll see ramshackle wooden buildings and a few adobe walls, and you can also leave a tribute at the gravesite of prospector Charles (“Seldom Seen Slim”) Ferge. He was a Death Valley legend whose memorial reads, “Lonely? Hell no! I’m half coyote and half wild burro.”

Now privately owned, Ballarat has a general store. It’s about 80 miles from The Oasis at Death Valley; if you’re driving into Death Valley via Ridgecrest and the Trona Wildrose Road, Ballarat makes an easy side trip.

About 31 miles northeast of The Oasis at Death Valley off Daylight Pass Road, Chloride City in the Funeral Mountains was part of one of the earliest mining areas in the Death Valley region.

As the legend goes, A.J. Franklin, a U.S. government civil engineer, first found silver-lead ore at Chloride Cliff in 1871. When he picked up a rock to kill a rattlesnake, Franklin noticed a vein of chloride of silver. No word on the fate of the rattlesnake. After staking a claim, Franklin, and later his son, worked the area intermittently to maintain the family’s stake. Eventually, prospectors fanned out from the gold strike in Nevada’s Bullfrog Mining District to work the area. By 1905, Chloride City arose — in a saddle located 4,800 feet above Death Valley — as the support town for local mining operations. Limited activity continued in the surrounding mountains into the 1940s.

There’s not much left here, other than the remains of three stamp mills. But the view from Chloride Cliff across Death Valley to the Panamint Mountains rivals the best in the national park. 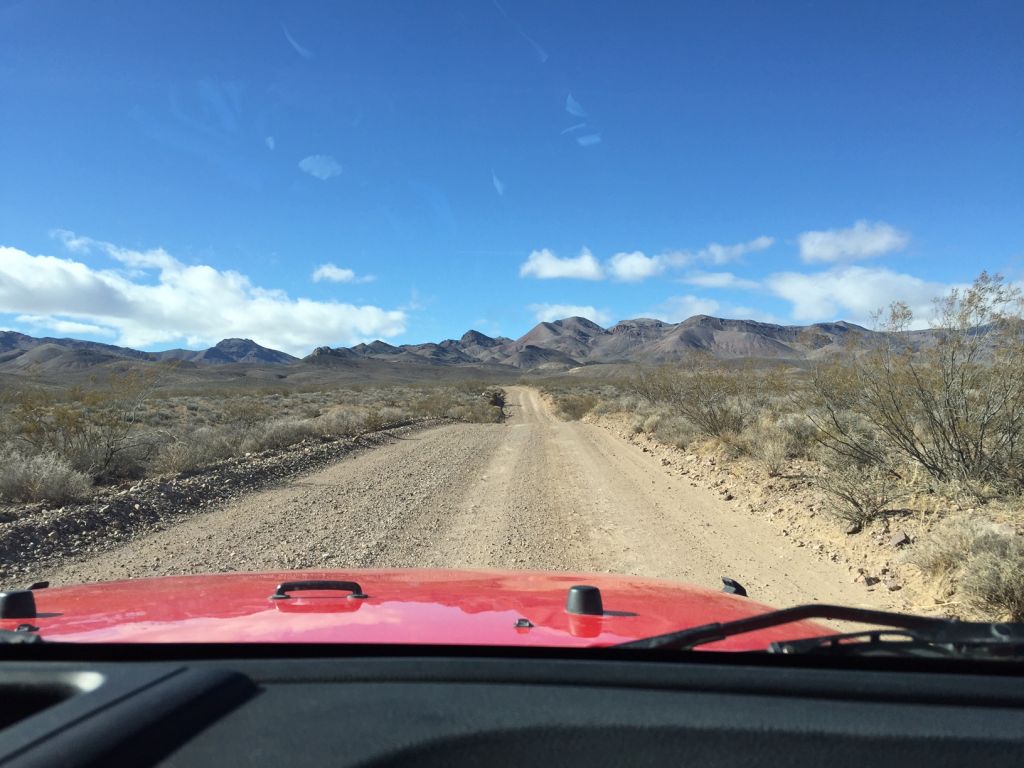 With a brief heyday in 1925 and 1926, this ghost town along today’s Titus Canyon Road boomed later than many Death Valley mining locations.

Prospectors originally found lead and copper around Leadfield in 1905 but transportation costs made the remote site unprofitable. According to the National Park Service, in March 1924 a trio of prospectors arrived in the canyon and established claims before selling their stakes to John Salsberry, who then founded the Western Lead Mines Company. The company improved a road and built a boarding house in 1926 as it officially established the town of Leadfield.

Soon after, C.C. Julian, an oilman and huckster, invested in the company and took charge as its president. He heavily promoted Leadfield and sold stock in the company, which eventually prompted a state investigation into Julian’s business practices. Even so, drilling and tunneling accelerated in the area. What killed Leadfield was not Julian’s unsavory business but the low-grade ore that the company ultimately found. It simply wasn’t high enough quality to make the operation profitable.

Drive the 27-mile, unpaved Titus Canyon Road and you won’t find the town of 1,749 lots that was laid out back in the 1920s. There are only a few lingering remnants of what might have been: the ruins of wooden and tin buildings, as well a mill’s foundations and numerous open mines.

For A World of Unforgettable Experiences® from The Xanterra Travel Collection® and its affiliated properties, visit xanterra.com/explore.

Written by: Matt Jaffe
Specializing in California, the Southwest, and Hawaii, Matt Jaffe is an award-winning former senior writer at Sunset magazine and contributes to a variety of publications, including Los Angeles, Arizona Highways, and Westways. His books include The Santa Monica Mountains: Range on the Edge and Oaxaca: The Spirit of Mexico.