What’s In a Name

What’s In a Name

It was William Shakespeare, of course, who concluded, “What’s in a name? That which we call a rose/By any other name would smell as sweet.”

But in the case of Death Valley, with apologies to Shakespeare, there’s little question that its imposing moniker enhances the legend of a place already notorious for the hottest temperature ever recorded anywhere in the world and as the driest location in North America.

As Richard E. Lingenfelter wrote in his magisterial history, Death Valley & The Amargosa: A Land of Illusion, “Nothing about Death Valley is more intriguing than its name and all that it grimly suggests.”

Though it sounds like something focus-grouped by a 21st-century marketer to generate business during the summer months when temperatures soar into the 120s (“Come to Death Valley…If You Dare”), the name dates back to the 19th century. And it had nothing to do with tourism.

While there are a number of accounts of the naming, Lingenfelter attributes it to someone in the Bennett-Arcan party of 1849-50, a group of gold miners and their families.

After being stranded and nearly dying, the party finally made its way out of the valley in February 1850. Lingenfelter quotes one of the participants, William Lewis Manley, as recalling “…we took off our hats, and then overlooking the scene of so much trial, suffering and death spoke the thought uppermost saying: ‘Good bye Death Valley!’”

Death Valley is not the only name that gives this unique region its color and character. The area’s history is written in its place names — some derived from ancient Native American words, others of more recent vintage and bestowed by miners and early visitors.

Here’s a sampling of Death Valley National Park’s most evocative names. Keep them in mind as you explore the park from your base at Furnace Creek Resort, which encompasses two hotels — the historic AAA Four Diamond, 66-room Inn at Death Valley and the family-oriented, 224-room Ranch at Death Valley.

Giving the Devil His Due

Dante’s View. Offering perhaps the finest panorama in the park, this overlook at 5,475 feet in the Black Mountains takes in a sweeping view of the Death Valley salt flats more than a mile below. The name was clearly inspired by Dante Alighieri’s 14th-century epic, Divine Comedy, in which the author journeys into hell.

Devil’s Golf Course. Forget about fairways and greens. A salt pan of spiky, crystalized stalagmites, some nearly two feet tall, the Devil’s Golf Course is all rough. The area off Badwater Road south of Furnace Creek was once covered by a lake, which deposited the minerals that compose this jagged terrain. The name dates to an early park service guidebook that declared, “only the devil could play golf” here. (But if you really want to shoot a round, try the 18-hole The Furnace Creek Golf Course at Death Valley, the lowest in the world).

Devil’s Cornfield. Another surreal Death Valley landscape, this area off State Highway 190 east of Stovepipe Wells has stands of arrow weed, a salt-tolerant shrub that grows upright from wind-deposited mounds of dirt. It takes a little imagination, but in a few places the stalk-like arrow weed almost appears to be growing in rows, like a crop of corn, hence the name.

Badwater. It’s the lowest point in North America at 282 feet below sea level, but its name dates back to 1910 to designate that the water here is filled with salt and therefore not potable.

Furnace Creek. The name either derives from the extreme valley heat or because of the spring-fed waters that flow from the ground at 82-85 degrees and feed the resort’s pools. The name was first used in 1860, then given to Furnace Creek Ranch in 1889 by the Pacific Coast Borax Co.

Funeral Mountains. From the Last Chance Range to Coffin Peak, Death Valley has all sorts of ominous place names. According to California Place Names: The Origin and Etymology of Current Geographic Names by Erwin G. Gudde, the Funeral Mountains get their name from debris flows that accumulated along the range’s base. To some observers, the flows resembled bands of crêpe once worn to signify mourning. 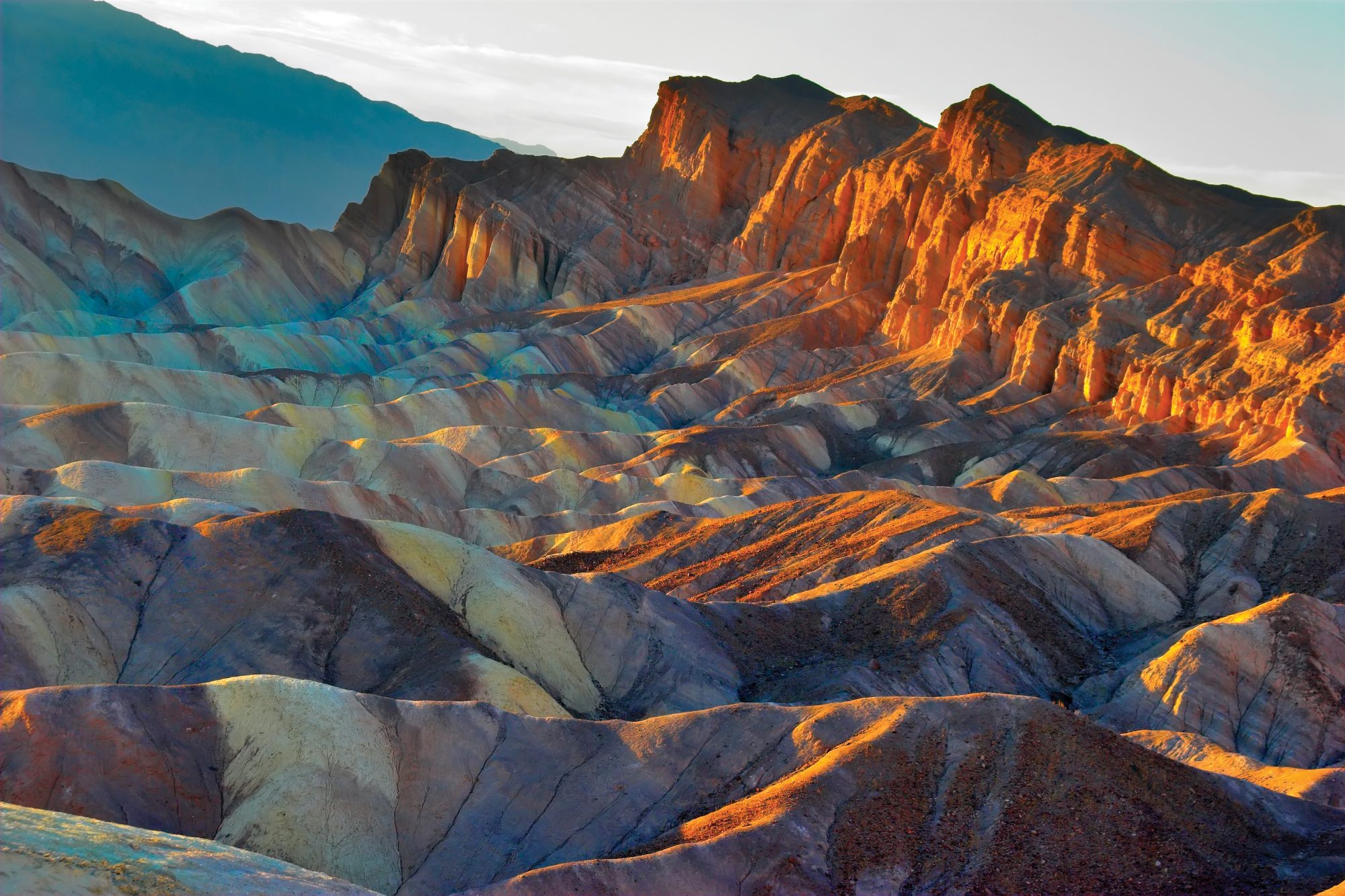 Ubehebe Crater. There are different explanations for the name of this 600-foot-deep, ½-mile wide crater. The National Park Service said the notion that Ubehebe means “big basket” in the Paiute language is a misnomer because the name was first used for a peak in the area; the valley’s Timbisha Shoshone Indians use the word Tem-pin-tta-Wo’sah (“Coyote’s Basket”) for the crater. Other sources say Ubehebe is a Paiute term for breasts and may refer to peaks visible from the crater rim. Meanwhile, according to Lingenfelter, the miners who established the Ubehebe Mining District said the name was inspired by a Native American princess.

Panamint Range and Valley. Home to Telescope Peak, the park’s highest point at 11,049 feet, the Panamint Range and its adjacent valley west of Death Valley, get their names from a Southern Paiute name for a group of Native Americans in the area. Panamint is a combination of Pa (water) and niwintsi (person). The name was first used in 1861.

Zabriskie Point. The park’s classic sunrise overlook in the badlands near Furnace Creek honors Christian B. Zabriskie, a longtime Death Valley executive with the Pacific Coast Borax Co. Zabriskie Point is also the name of a 1970 counterculture cult film classic that features scenes shot in the park.

For information and reservations, visit oasisatdeathvalley.com or call 800-236-7916. The Furnace Creek Resort is located in a lush oasis surrounded by the vast and arid desert of Death Valley National Park — just 120 miles northwest of Las Vegas, Nev., and 275 miles northeast of Los Angeles, Calif.

Written By: Matt Jaffe
Specializing in California, the Southwest, and Hawaii, Matt Jaffe is an award-winning former senior writer at Sunset magazine and contributes to a variety of publications, including Los Angeles, Arizona Highways, and Westways. His books include The Santa Monica Mountains: Range on the Edge and Oaxaca: The Spirit of Mexico.

« Call of the Wild in Death Valley
Death Valley: A Geological Wonder »
Our site uses cookies.